Time for our monthly market risk update. A few notes before we begin: first, although we have been talking about a recession in our future, I want to stress again that we do not anticipate a recession in the near term. However, insomuch as near-term forecasting is just about as accurate as astrology, we have taken some profits, but remain materially invested in the equity markets.

We do, however, expect some kind of a fear-based correction simply because we haven’t had one in a while. I believe that a reversion to the mean is likely, especially when considering human behavior, and the S&P 500 is currently experiencing the longest duration of time without a 3% drop in its history. So, regardless of economic health, we await such an emotion-driven drop. There is no reason to further prepare for such a drop because they tend to be short-lived and generally irrelevant. However, if a fear based drop looks more like a 10% drop (or a 13% drop as we saw twice in mid 2015 and again in early 2016), we are ready to use some of our “sideline money” to do some cherry picking. This is important because market corrections can be the most profitable part of a market cycle, as long as discipline remains the cornerstone of our investment policy. This means avoiding feelings of market euphoria and invincibility, which can encourage an investor to take on more risk than they can bear once reality (a recession) sets in.

One more housekeeping note. We will be publishing a few updates to our mid- and longer-term forecast in consideration of the new tax legislation. The preview is this: we believe that the recession we’ve been writing about will likely be pushed back a few months, but the inflection that occurs when the recession hits could be far more significant. We will also touch on the coming November election, which we believe could have a greater effect on the markets than any mid-term election has in more than 20 years. Until then, let’s get into our Monthly Risk update with our good friend Brad McMillan.

Market risks come in three flavors: recession risk, economic shock risk, and risks within the market itself. So, what do these risks look like for January? Let’s take a closer look at the numbers.

Recessions are strongly associated with market drawdowns. Indeed, 8 of 10 bear markets have occurred during recessions. Right now the conditions that historically have signaled a potential recession are not in place. As such, economic factors remain at a green light, although risks are rising.

There are two major systemic factors—the price of oil and the price of money (better known as interest rates)—that drive the economy and the financial markets, and they have a proven ability to derail them. Both have been causal factors in previous bear markets and warrant close attention.

The price of oil. Typically, oil prices cause disruption when they spike. This is a warning sign of both a recession and a bear market. 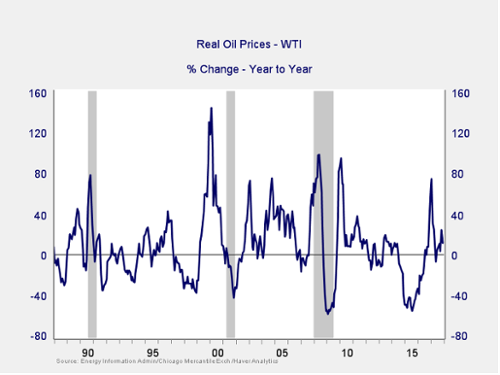 As we saw with the price spike earlier in 2017, a quick spike—it did not appear to reach a problem level and was short lived—is not necessarily an indicator of trouble. The subsequent decline also took this indicator well out of the trouble zone. That said, we have seen prices start to rise again, to relatively high levels for the period since the crisis, and it bears watching. Overall, however, there are no signs of immediate risk from this indicator, so it remains at a green light.

The price of money. I cover interest rates in the economic update, but they warrant a look here as well. 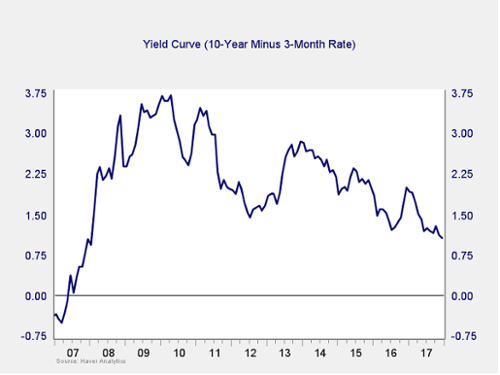 The yield curve spread contracted again in December, taking it to a new post-crisis low. It is still outside the trouble zone, so the immediate risk remains low. But the fact that it continued to decline to a new post-crisis low, combined with the Fed's expected rate increases, suggests that caution is warranted. I am leaving this measure at a green light for now, but it is getting closer to yellow.

Signal: Green light (with a shade of yellow)

Beyond the economy, we can also learn quite a bit by examining the market itself. For our purposes, two things are important:

To recognize what factors signal high riskTo try to determine when those factors signal that risk has become an immediate, rather than theoretical, concern

Risk factor #1: Valuation levels. When it comes to assessing valuations, I find longer-term metrics—particularly the cyclically adjusted Shiller P/E ratio, which looks at average earnings over the past 10 years—to be the most useful in determining overall risk. 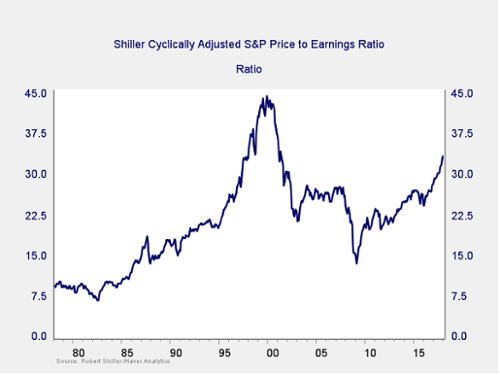 The chart above is interesting for a few reasons. Since the presidential election more than a year ago, equity valuations have increased to levels not seen since the early 2000s. In addition, gains this year have pushed valuations even higher, to the second-highest level of all time. Right now, they are below only 1999, as you can see from the chart.

Although they are at the highest level since 1999, valuations remain below that peak, so you might argue that this metric does not suggest immediate risk. Of course, this argument assumes we might head back to 2000 bubble conditions, which isn’t exactly reassuring.

The Shiller P/E ratio is a good risk indicator, but it’s a terrible timing indicator. One way to remedy that is to look at changes in valuation levels over time instead of absolute levels. 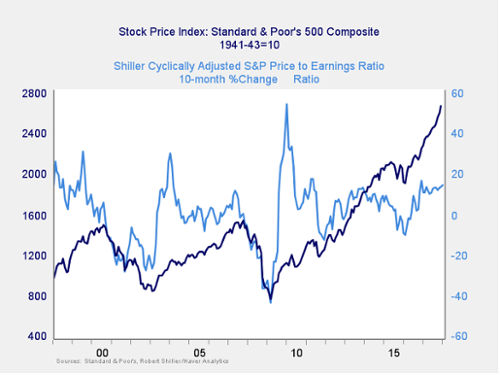 Here, you can see that when valuations roll over, with the change dropping below zero over a 10-month or 200-day period, the market itself typically drops shortly thereafter. Strong stock market performance has kept the long-term trend in valuations at a healthy positive level, well above the trouble zone. Therefore, this indicator shows low immediate risk. 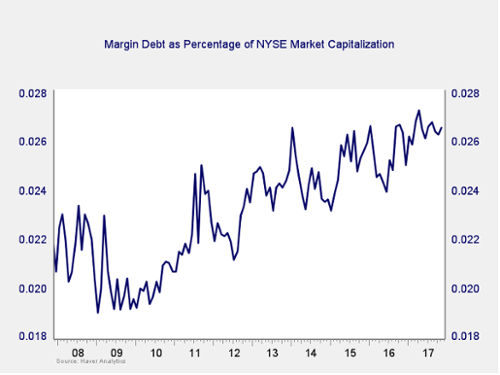 Debt levels as a percentage of market capitalization have moderated over the past couple of months, although they remain close to recent all-time highs. The overall high levels of debt are concerning; however, as noted above, high risk is not immediate risk, and the recent moderation is a positive sign.

For immediate risk, changes in margin debt are a better indicator than the level of that debt. Consistent with this, if we look at the change over time, spikes in debt levels typically precede a drawdown.

As you can see in the chart above, the annual change in debt as a percentage of market capitalization has dropped back over the past couple of months, leaving it close to zero. Still, this indicator is not signaling immediate risk. But the overall debt level remains very high, and we have seen something approaching a spike in recent months, so the risk level remains worth watching. We are keeping this at a yellow light.

Risk factor #3: Technical factors. A good way to track overall market trends is to review the current level versus recent performance. Two metrics I follow are the 200- and 400-day moving averages. I start to pay attention when a market breaks through its 200-day average, and a break through the 400-day often signals further trouble ahead. 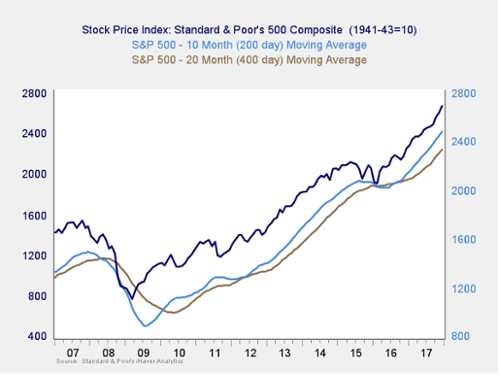 These indicators remain positive, with all three major U.S. indices well above both trend lines. Even as markets continue to reach new highs, it’s quite possible that the advance will continue given growth in earnings and positive consumer, business, and investor sentiment. As we continue to break into new territory, this seems to be actually propelling the market higher, despite the high valuation risk level. With the index well above the trend lines, the likely trend continues to be positive.

The overall economic environment remains supportive, and neither of the likely shock factors is necessarily indicating immediate risk. Similarly, while several of the market indicators point to an elevated level of risk, that risk does not look to be immediate. Overall, the risk levels have increased moderately, but the market environment remains favorable in the near term.

We remain at a green light for this month.

So as I’ve said, we have been discussing this “last chapter” of the current economic growth cycle for some time now. The final segment of such a cycle tends to be significant because the memory of crushing and sometimes intolerable market crashes and the pain that often ensues upon the realization that an investor has gotten in over their heads has faded from the previous iteration. While we hope to exploit further growth and profits within our portfolios in 2018, we urge everyone to stay focused and not to allow stories of obscene profits derail your discipline. It is during the highest of the highs and the lowest of the lows when our job of serving as a guide and as a counselor becomes the most difficult.

And so, with grounded enthusiasm, we look forward to a good year.

On Monday, let us celebrate the influence Dr. Martin Luther King had on fairness and equality in our great nation.  And let us realize that his ultimate vision, while closer, has not yet been realized.

Have a great weekend!